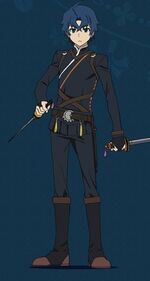 Toru Acura is a 20 year old saboteur from the Acura Village. After the downfall of the Gazu Empire and peace is restored, he lost his way of life. After he runs into a sorceress named Chaika Trabant, he follows her in hopes of finding meaning to his life again.

Retrieved from "https://hitsugimenochaika.fandom.com/wiki/Hitsugi_no_Chaika_Wiki?oldid=5408"
Community content is available under CC-BY-SA unless otherwise noted.